Caissa is the "patron goddess" of chess players. She was created in a poem called Caïssa written in 1763 by English poet and philologist Sir William Jones.

In the poem, the god Mars falls in love with the goddess Caïssa, portrayed as a Thracian dryad. Caïssa rebuffs his advances and suggests he take solace in the company of the god Euphron—the god of sport. After hearing Mars' laments, Euphron

...fram'd a tablet of celestial mold, Inlay'd with squares of silver and of gold; Then of two metals form'd the warlike band, That here compact in show of battle stand; He taught the rules that guide the pensive game, And call'd it Caïssa from the dryad's name: (Whence Albion's sons, who most its praise confess, Approv'd the play, and nam'd it thoughtful Chess.)

Mars then presents the game of chess to Caissa in an attempt to win her affection.

Jones' work was inspired by the poem Scacchia ludus ("The game of Chess"), written by Italian poet Marco Girolamo Vida in 1510. 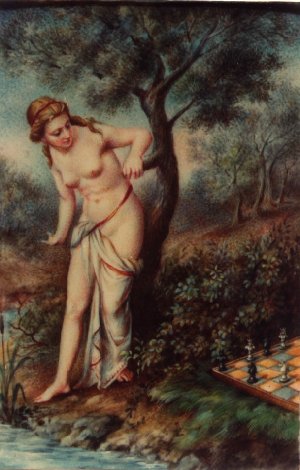 For chess players, Caissa is often invoked as a source of inspiration or luck, e.g. "Caissa was with me in that game."

The name is most properly spelled as Caïssa, but usually simplified as Caissa.